Natural Gas Futures Reach New Highs: What You Need to Know this Week

Pricing has taken a turn recently and within the months of October and November, the January contract has seen a dip of 85 cents and then an eight-month low set of $2.805/MMBtu. The mild temperatures have proven to lower heating demand causing these fluctuations in pricing.

As of November 2016, the future natural gas contract of January has climbed 30%, ultimately entailing prices will resemble similar highs seen in October as well as bring the 2017 belt close to its maximum point in the past 12 months.

In contrast, due to forecast changes and weather not living up to prediction, natural gas prices have been seeing a change in direction.  As of November, the January contract had completely wiped out its precedent losses from past months and folded out on Monday with the mid-October high of $3.654/MMBtu.  Traders were anxious to propel the January contract to newer highs but once it reopened it only saw a spike of $3.723/MMBtu before quickly being topped off at a high of $3.635/MMBtu.

Weather-motivated surge pricing has a bearing that is primarily halted to the 2017 year.  The warm summer temperatures are quickly going to be topped by below-average temperatures scattering across winter months.  The Northern half of the U.S. is expected to be hit with colder-than-usual temperatures in the remaining weeks of December.

Natural gas, nuclear, coal, and various energy resources comprise the detailed energy pricing that the market development is centered around.  The generation can also be affected by naturally occurring events such as weather and natural disasters.  In addition, it can be affected by production, storage level, and geographical political events.  Weather is a major element within energy markets because it directly influences the amount of demand for electricity and natural gas.  Extreme weather fluctuations create a higher demand for natural gas whether it is directly heating houses or indirectly by becoming a fuel basis to generate air conditioners.  In a parallel sense, natural disasters can unexpectedly affect supply ultimately causing price variation.  Overall, pricing changes affect everyone especially businesses so it is critical to stay educated on spikes in energy costs that way money does not go to waste in the long run.
Market Driven Factors

Several factors that are expected to drive energy markets could stem from the below-average temperatures which entail would bring the demand for heat to increase.  Additional gas imports to Mexico could also be foreshadowed in upcoming months.

As for extensive factors, there is expected to be a 4% increase in generated power gas, according to the US energy information Administration.  Weather conditions in the Northeast are predicted to receive higher precipitation amounts whereas the Midwest is preparing for cooler weather. LNG or Liquid Natural Gas have pipelines now allowing for the gas to be exported.  The PJM board has granted permission to a $490-million-dollar investment plan for Transmissions.  Increased capacity for PJM’s Capacity Performance model has emptied prices beyond the RTO.  Higher tariff rates will allow years leading up to 2024 to aid in the coverage of operating and administrative costs.  Conclusively, any generating capacity of 21GW is expected to retire by 2020.
Factors Driving the Market Down

In recent news, one factor driving the market down is the switch from coal to gas.  Something that could also drive it down would be continuing the recovery for the rig count which depends on the reduction of the output plan settled by OPEC.  Ultimately this could bring the price of $50 per barrel back into the market.

The approval of extensive capacity enhancement for the Rockies Express Pipeline could cause a decrease in the Market as well as another pipeline project in the Algonquin Gas Transmission’s Incremental Market.  New wind, solar and natural gas will be the generating forces behind the US electric grid’s addition of 55GW of capacity.  The nuclear industry understands the competitiveness of the energy market which is why they seek to reduce costs by 30% in 2018.

Pictured below is a graph analyzing the month-ahead prices for natural gas.  It provides insight as to how these prices are settling on the New York Mercantile Exchange.  It also gives an explanation as to where the market lies in comparison to where it has stood over the past four years.

Henry Hub is a distribution center that lies on the natural gas pipeline.  Movement at the Henry Hub can be seen as a trademark for markets across the country in regard to natural gas prices.  The chart pictured explains how Henry Hub onwards prices for natural gas that have been influenced over the past 12+ months. 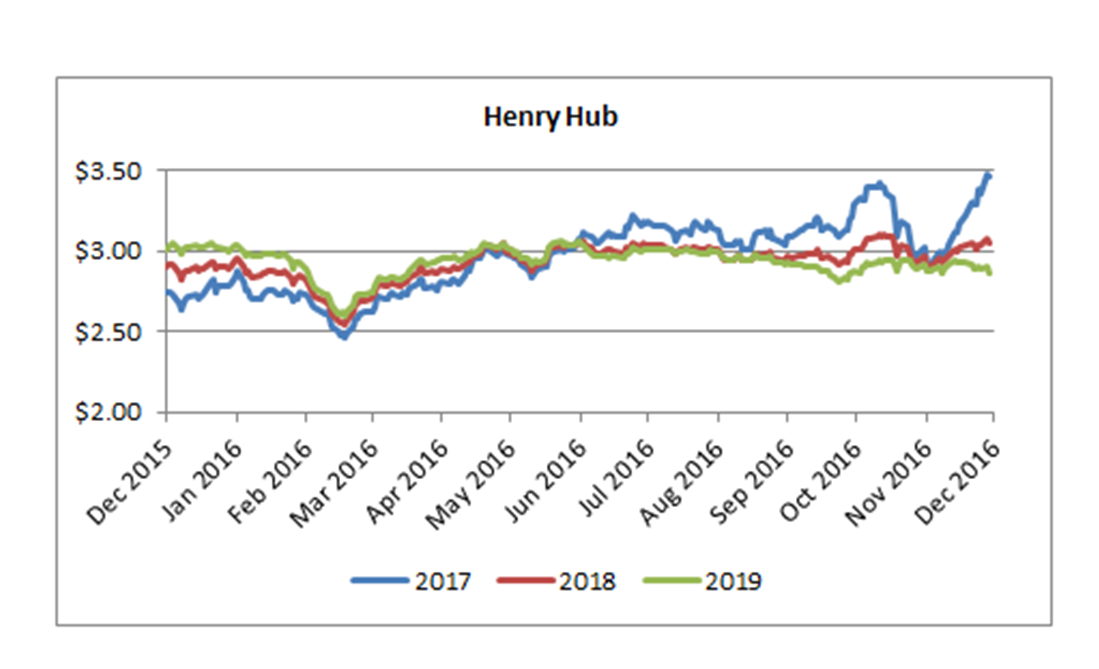 Power Around-the-Clock Prices for One Year

Weather is a dominant factor in the pricing of power and can direct a spike or downfall at any point.  The charts below give a better understanding as to what was trending over the past year for the areas: New England ISO, mid-Atlantic region PJM, New York City NYISO Zone J, and Northern Illinois.

Natural Gas Prices for One Year

Regions can have their own factors which provide a basis for natural gas prices, even with Henry Hub giving a trademark as to where prices were trending over the previous year.  The charts below show onward price trends for the past year for New England (Algonquin), New York (Transco Z6 NonNY and Transco Z6 NY), and Chicago (Chicago City Gate).

Extreme weather conditions can directly correlate with fluctuations in energy prices.  According to the National Oceanic and Atmospheric Administration, the maps below show current weather forecasts.  The high probability of regions getting below-average temperatures is shaded blue.  The red indicates just the opposite and shows areas where the weather is expected to see above-average temperatures.  The white regions have a probability of receiving normal temperatures and the darkening colors for both respective colors illustrate a higher percentage of the region seeing irregular weather.